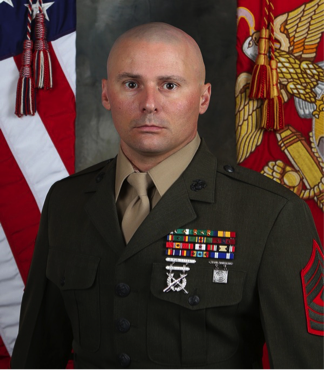 First Sergeant Dennison enlisted in the Marine Corps on 27 September 1993 and reported for basic training at the Marine Corps Recruit Depot, San Diego, CA on 25 January 1994.  He was meritoriously promoted to Private First Class upon graduation.

Private First Class Dennison then reported to the School of Infantry for training with the Marine Combat Training Battalion at Camp Pendleton, CA on 26 April 1994.  Upon graduation on 3 June 1994, he reported to Marine Corps Service Support School, Camp Johnson, Camp Lejeune, NC for training in the Military Occupational Specialty (MOS) of 0131; Unit Diary (UD) Clerk.

After completion of MOS training, Private First Class Dennison was sent to Okinawa, Japan and assigned to the 3d Surveillance, Reconnaissance, Intelligence Group (SRIG) on 17 October 1994 and was promoted to Lance Corporal in December 1994.  Due to unit restructuring, Lance Corporal Dennison was reassigned to Headquarters & Service Company, III Marine Expeditionary Force (MEF) on 5 March 1995 where he held the billets of Pay Clerk, UD Chief, and Service Record Book (SRB) Clerk.

After two years in Okinawa, Lance Corporal Dennison transferred to 3d Light Armored Reconnaissance (LAR) Battalion, Twentynine Palms, CA and joined the unit on 17 November 1996.  He was promoted to the rank of Corporal in August 1997.  During this tour, he served in the billets of Pay Chief, UD Chief, SRB Chief, as well as becoming the Assistant Personnel Chief until his release from active duty on 15 December 1997.

During his time out of the Marine Corps, Corporal Dennison worked various jobs including driving tractor-trailer trucks from coast to coast, driving cement mixer trucks, dump trucks, and working for a company building hog barns across the states of Iowa and Illinois.

On 1 October 2001, Lance Corporal Dennison reenlisted back into the Marine Corps – forfeiting his rank as Corporal – and was assigned to Recruiting Station, Rock Island, IL awaiting further orders.  On 12 February 2002, he was again assigned to Twentynine Palms, CA with the Headquarters Battalion Installation Personnel Administration Center (IPAC) were he held the billets of Separations Noncommissioned Officer (NCO) and the Separations Staff Noncommissioned Officer in Charge (SNCOIC).  In April 2002, he regained the rank of Corporal.  During February of 2003, he was meritoriously promoted to the rank of Sergeant.

Sergeant Dennison was given orders to report to 3d Battalion, 11th Marines, Twentynine Palms, CA on 7 June 2003 where he would serve as the Battalion Administration Chief.  During this tour, he would deploy in support of Operation IRAQI FREEDOM 2 for seven months operating out of Camp Ar Ramadi. On 1 June 2005, he was promoted to the rank of Staff Sergeant.

Staff Sergeant Dennison was then assigned to Independent Duty and received orders to report to Company C, 4th Tank Battalion, Boise, ID on 10 August 2005.  Here he served his primary duty as the Administration Chief along with a myriad of collateral duties.  He was promoted to the rank of Gunnery Sergeant in June 2008.

On 12 July 2009, Gunnery Sergeant Dennison reported to the Officer in Charge (OIC) of the Marine Corps Administrative Analysis Team (MCAAT)-West, Camp Pendleton, CA where he served as an administrative analyst touring the western United States, Alaska, Japan, and Korea analyzing unit administration for effectiveness and efficiency.

After a three-year tour, Gunnery Sergeant Dennison was transferred to Headquarters Company, 1st Marine Regiment, Camp Pendleton, CA and held the billets of Regimental Personnel Chief and Manpower Officer.  During this tour, he would deploy in support of Operation ENDURING FREEDOM to Afghanistan with the command deck from the regiment.  During the deployment, Gunnery Sergeant Dennison served as the Adjutant for Task Force BELLEAU WOOD.

Upon promotion to the rank of First Sergeant in May 2014, he received orders back to Independent Duty at Site Support, Marine Wing Support Squadron 471, Minneapolis, MN where he currently serves as the Site First Sergeant as of 2 July 2014.